How is Ohm’s Law Used?

To power any vaping device, you need to have a safe amount of current, the appropriate level of voltage, and just the right amount of resistance. Voltage and current work alongside each other and resistance are added to the device to keep the two levels steady and prevent any sudden surges in energy. This electrical harmony (measured in Amps) means you can turn on your device and you can vape without worry.

As resistance is a manmade measure to keep us safe, it cannot adapt to the power it manages by itself. We need to be able to predict the level of power to create the correct level of resistance via battery limits or coils so we can turn on our vape device but also keep ourselves safe. That is where Ohm’s Law comes in.

What is Ohm’s Law?

Ohm’s Law is an equation, meaning that it involves a bit of math’s, but it is nothing to be afraid of. The nature of electricity, chemical or otherwise, means we do not immediately know everything about it but by moving this sum around and completing a series of mathematical operations (either multiplication or division), you will always be able to calculate the value you want.

It is often visualized as a triangle and this makes it even easier to remember. Using it for reference, you can see that to determine the current in your device, you would divide the voltage by resistance or V=I/R, in more mathematical terms.

As long as one knows how to apply the results, he/she is ready. But to control the device, however, one has to learn and use the formulas (with any regular calculator) which may simply be depicted inside of a triangle. 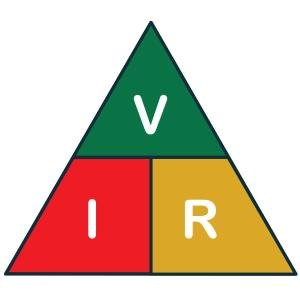 The three main elements in any electrical circuit are represented by the letters V, I, and R

From the above visual it is easy to establish the relationships between Voltage, Current, and Resistance. From the following one may explore the triangle to finalize the formula of the desired current and wattage of the coil being used.

To determine the current drawn through the coil :

Let’s put the formula to work in a real-life example.

Using a mechanical mod, with a freshly charged battery, theoretically have 4.2 V available to power the coil. If the coil is 0.5Ω. Then to determine the current, in amps (A), according to the above formula:

As it is seen, with a 0.5-ohm coil and a freshly charged battery at 4.2 volts, the resulting max current drawn will be 8.4 amps.

[If your battery has a 10-amp limit, you are well below the cap. Don’t forget that using a dual mechanical mod in a series configuration will double your amp draw per battery, and you will have to build coils with twice as high resistance to be safe. Also note that as the battery depletes, the current will also tail off.]

For example, when the battery reaches 3.7 volts with the same load, the current will drop to 7.4 amps

The next thing you will probably want to know is the power generated at the coil or wattage. It’s not shown in the triangle, but the formula is simple. Just multiply the current in your circuit by the voltage applied:

In our original example, the formula would look like this:

So that 0.5-ohm coil with a fully charged battery at 4.2 volts will pull a maximum of 8.4 amps and deliver 35.3 watts. You can see that as the resistance of your coil increases, current and wattage will both drop.

The second Ohm’s Law formula that can be of use to us is calculating resistance. Let’s say that you have a battery with a 10-amp current limit and you want to determine the lowest coil resistance that you can safely run without exceeding the CDR of the battery.

To calculate, you would use the following formula:

Since you know that the battery CDR is 10 amps, you might want to target 9 amps in your calculation, to give yourself 1 amp of headroom. You also know that your max voltage will be 4.2 volts on a single battery mod. So the calculation goes like this:

The result tells you that your safe lower limit with the 10-amp battery is 0.47 ohms—anything lower and you risk exceeding the current limit of the battery. Of course, if you have a 25-amp battery, your low resistance drops to 0.17 ohms:

Finally, and probably not as useful to us, using the triangle you can solve for voltage in a circuit, as long as you know the values of the other two variables.

To solve for voltage when current and resistance are known, the formula looks like this:

It is now well apparent that the most useful three formulas for the vapers would help us calculate three different important aspects of the coil, i.e.

These allow us to figure out the current drawn by the coil and the resultant wattage. An increase in resistance will drop off current and power and vice versa. The resistance formula allows us to calculate a safe low resistance based on the CDR of the battery in use. This information helps us stay within the safe limit of batteries and to adjust the amount of power of the coil to achieve an individual’s state of experience of vaping.

However, there are other considerations also to be made – like that of ramp time and temperature – which would be determined by wire gauge and mass.

One final, and critical piece of advice: ALWAYS assume that your battery voltage is the equivalent of a fully charged battery: 4.2 volts for a single battery mod. To be safe, ALWAYS use the full theoretical battery voltage (at full charge) in the calculations.

<-- Please select one by clicking the box
Add to bundle